Everything You Can Imagine is Real 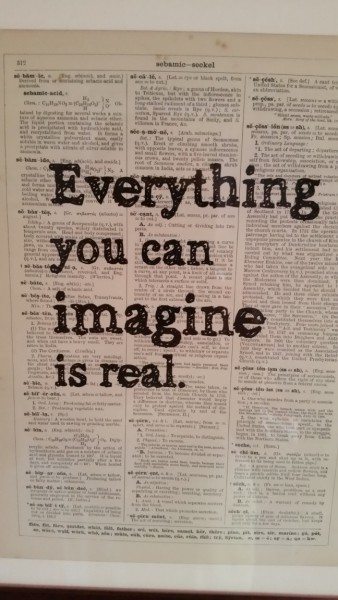 Do you believe that’s true? Everything you can imagine is real?

A few months ago, I had an experience that brought me a bit more clarity and a new perspective about what is real or true.

In February, we had a significant amount of snow. I’m a travel agent so weather conditions directly impact the course of my day. One day I didn’t open the office because of road conditions. It wasn’t a play day. I spent hours on the telephone with airlines and clients. I was re-routing arrangements travel and monitoring flights to make certain everyone got where they were supposed to go.

I felt quite victorious when two young ladies, who appeared destined to miss their connection, sent me a jubilant text that they were in their assigned seats, headed from Charlotte to Cancun.

I knew they would make it! I imagined them dashing between gates. I knew they were landing and departing from the same terminal and that they didn’t have far to go. When their extremely delayed flight from Raleigh landed at Charlotte’s Douglas Airport I was dialoging with an airline reservation agent. We were creating a backup plan and watching the computer updates for both arrival and departure flights. It was hairy. They had 4 minutes to make the connection! All the while, I pictured them on the Cancun bound flight ,in my mind. I know they were doing the same. We were all holding the same picture and believing it was possible. “You’ll make it. Don’t give up. Run like the wind when you get off the plane.”, I repeated.

They messaged me when they were settled in their all-inclusive hotel enjoying a celebratory beverage.

That evening I had an email request for a live interview by a local television station. The reporter asked if he could come to my office the following morning He wondered if the miserable winter weather was causing people to book trips departing immediately. I told him that wasn’t my experience.

When the reporter and his camera man arrived at my office, he had his questions prepared. He again asked me if we were receiving requests for immediate departures from people who wanted to escape the cold right away. I told him that hadn’t been the case and went on to describe a day in the life of a travel agent, from my perspective~ what really happens!

The telephone rang and he asked if I should answer it. I said that another agent in the office would pick up the call. We continued our interview.

It was very pleasant, but I wasn’t able to confirm his expectation.

The television team thanked me and said they would take a few more shots from outside my office before leaving.

In the meantime, clients walked in and my attention was diverted.

Moments later, while the pair were still filming outside our door another agent came to my desk and said, “You won’t believe this. A man just called and asked me to book he and a friend to Jamaica. They want to leave tomorrow!”.

Wow! What a coincidence. I emailed the reporter.

While Susan was making calls to check availability of flights and hotels, the gentleman was kind enough to call again, saying that his friend had already made the arrangements.

On the news that night, I watched the story unfold exactly as the reporter had imagined it; just as he had pitched the story to his editor that morning.

A lot of scenarios ran through my head. I wondered if the reporter, himself, was so sick of the weather that he wanted to get out of town or if a friend had planted that seed. Did someone say “I’m sick of this weather. I’m going to get out of here and go anywhere the sun is shining and it’s warm…tomorrow. I want to be someplace else ~like Jamaica. “ Did they script this scene?

This really tickles me. My ego wanted to say the whole scenario was fabricated.

I don’t think it was. That reporter and I were not in vibrational harmony! I didn’t see his story as “real” or my reality. It wasn’t my experience. He was persistent, though. He knew to move on, to interview someone else. He didn’t give up. He BELIEVED he had a good story and that the storyline he imagined was playing out somewhere.

The reporter interviewed another agent who, indeed, did book someone to depart the following day for, you got it…..Jamaica. He concluded his broadcast with a smile and told his audience that the potential traveler had called the agent while they were interviewing him and that the caller did, in fact, purchase a package to leave the next morning!

That little stinker got his story!

I really wanted to tell my story, my reality. Most people would not have believed it was possible for my folks to deplane at one gate and be boarded at the other within 4 minutes. I BELIEVED it could happen. I wouldn’t throw in the towel or book them on another flight until the gate was closed!

I got to tell my story, too; what was true for me. I’ve just shared it with you!

We stand in different lights. We see the world from different perspectives. We have different expectations. Our truths are true….for us. We write our own story every day. Whether it’s one we like is up to us.

I think of that day every time another individual and I tell different versions of something we’ve both experienced. It feels so free knowing I don’t have to convince anyone else that what I imagine, what I believe is real! It is for me.

“Everything you can imagine is real.” Imagine something you really want!

This is so much fun.

Have a great weekend!